“Good things can happen to lonely hearts and wounded families. . . . Fans of both Ann Patchett and Anne Tyler are likely to enjoy this satisfying, unhurried novel.” – starred review in Kirkus

Write or Die’s Staff Pick for Best Books of 2022

“In her captivating new novel, Close-Up,  Michelle Herman unfolds a complex family history in which abandonment has caused painful estrangements and unexpected alliances.  With subtle wit and unshakeable confidence,  Herman demonstrates the alternating forms a family can take: a refuge, a prison,  a solace, a vexation, one at a time or all at once, and right before your eyes.  Close-Up  is a magic act of a novel.”   – Valerie Martin, author of Property and I Give It To You

“You can’t believe how difficult it is to make the inked-upped artifice of the written word disappear before your eyes as you read.  And yet Michelle Herman does this effortlessly in her vexed-less Windex-esque novel, Close-Up. You enter into this intricate, eye-poppingly lucid dream of a book, REMing along the pages that are rigged for running the clearest of clear window written styles. Herman is a master of artful artlessness, and that is no mean feat. She constructs this substantially potent, packed with the power of this ever-present very present narrative with an invisible scaffolding of a nonchalant native conjurer.  How did she do it?  It doesn’t matter. It is so deftly done.”   – Michael Martone, author of The Moon Over Wapakoneta and The Complete Writings of Art Smith, The Bird Boy of Fort Wayne, Edited by Michael Martone

“Michelle Herman’s novel is one of those books that I read in the full belief that its characters are real. No way could Caroline and Jacob not exist; their buoyant conversation, their predicaments, their struggles to grow up whole (and sane) in the company of their infuriating parents were too alive on the page to be merely-merely?!-constructed by this canny and sophisticated, tough and tender author. Her novel, both wise and smart, is wholly deserving of its place as the first winner of the Donald L. Jordan Literary Prize for Excellence.”   – Rosellen Brown, author of Tender Mercies and Before and After

Watch an interview with Michelle Herman from the virtual book launch of Close-Up on March 15, 2022.

The protagonist of Herman’s 2005 novel Dog, J.T. Rosen, returns in a new novel that casts her as the mentor of a young poet and sends her hurtling back into a difficult relationship of her youth in this story of loneliness, misdirection, misunderstanding, longing, and redemption that traces five characters as they come together and apart in a series of interlocking portraits.

Jacob Lieb is a young magician with a specialty in close-up magic who reconnects—begrudgingly—with his estranged father at the urging of the young poet with whom he falls in love. The poet, Caroline Forester, and her mother, Jeanie, struggle with their own relationship as Caroline grows close to Jacob’s father, Martin Lieberman—and an improbable friendship develops between Lieberman and Jeanie Forester, even as Rosen and Lieberman, Jill Rosen’s old flame, circle each other warily.

Herman’s abiding interest, in all of her work, has been in what makes and drives—and complicates, and undermines—relationships: marriages, parents and children and grandchildren, siblings, cousins, romances, friendships. The missed connections and misunderstandings between people who yearn for connectedness and understanding are at the center of Close-Up—as is poetry . . . and magic.

An excerpt from Close-Up:

Jacob was practicing a new trick: the flap and flutter like wings as the deck of cards bridged his hands and then snapped shut, then fanned open again, so slowly that the cards appeared to be suspended in midair.

Caroline watched him from across the room they had begun, self-consciously, to call the “family room” after Harry’s birth. The bird, renamed Delirious—which suited her much better than Dolores—was perched on her shoulder, probably asleep; the baby was awake, on a blanket at her feet. Jacob shut the deck of cards again—the many turning into one so suddenly it was as if they’d actually vanished, and an instant later the one was gone, too: his hands—palms up, then out—were empty. She’d seen him work a deck of cards so many times by now, it made no sense that this illusion was so potent, still—and yet there it was. Jacob had taught her to see many things as they occurred, things almost no one else could see, but somehow, no matter how he talked her through it and how much he slowed things down for her, she could never manage to see this: the place between there and not there, the instant of becoming gone—of something turning into nothing.

She watched him from her corner in the room that was surely meant to be a dining room—a hundred-year-old metal chandelier hung from the center of the ceiling—where she sat in the big, thick-cushioned glider chair that had been a present from his father. The baby lay on a pale blue square of satin-trimmed monogrammed blanket—yet another gift from Martin—under the floor gym, a bright blue-and-yellow checked cloth-covered arch from which various toys dangled. Harry was studying it as if he’d be tested on it later, muttering a steady stream of syllables to himself and from time to time letting out a piercing shriek his grandfather referred to as his “excellent James Brown impersonation.”

Jacob had one eye on the television, which was muted, as he opened up the deck again (and now the cards—imprinted with his name and Right Before Your Very Eyes on a scroll below it and, below that, his own gently caricatured likeness in top hat and tails—appeared to be spread flat across an invisible tabletop), then quickly swiped it shut, this time with a snap like a sprung mousetrap. The baby paused momentarily in his monologue of ooh gah ah las to spit out a laugh, which at fifteen weeks wasn’t much more than a clicking sound, as if he were stammering over a word that began with a \k\—cards, for example (it would not surprise her if cards turned out to be her son’s first word). The bird woke up and shivered, fluffing her wings and ducking her head against Caroline’s neck. Her stick-figure feet dug in a little harder through both the cloth diaper on her shoulder and the fabric of the two shirts she was wearing—a tee shirt and a flannel button-down, both Jacob’s…. 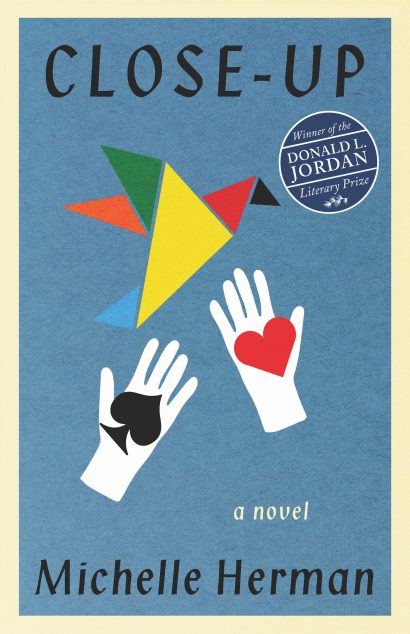